Dubbed ‘Kr00k‘ and tracked as CVE-2019-15126, the flaw could let nearby remote attackers intercept and decrypt some wireless network packets transmitted over-the-air by a vulnerable device.

The attacker does not need to be connected to the victim’s wireless network and the flaw works against vulnerable devices using WPA2-Personal or WPA2-Enterprise protocols, with AES-CCMP encryption, to protect their network traffic.

According to the researchers, the Kr00k flaw is somewhat related to the KRACK attack, a technique that makes it easier for attackers to hack Wi-Fi passwords protected using a widely-used WPA2 network protocol.

Before proceeding to details of the new Kr00k attack, it’s important to note that:

What is Kr00k Attack & How Does it Work?

Now you might be wondering what the Kr00k attack then let attackers do?

In brief, a successful attack merely degrades your security a step towards what you’d have on an open Wi-Fi network. Thus, what sensitive information attackers can capture from a vulnerable device is totally depends upon the lack of the next layer of network traffic encryption i.e., visiting non-HTTPS websites. 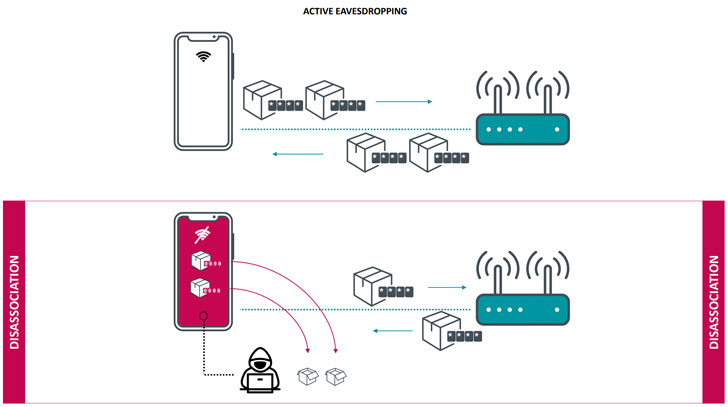 The attack relies on the fact that when a device suddenly gets disconnected from the wireless network, the Wi-Fi chip clears the session key in the memory and set it to zero, but the chip inadvertently transmits all data frames left in the buffer with an all-zero encryption key even after the disassociation.

Therefore, an attacker in near proximity to vulnerable devices can use this flaw to repeatedly trigger disassociations by sending deauthentication packets over the air to capture more data frames, “potentially containing sensitive data, including DNS, ARP, ICMP, HTTP, TCP, and TLS packets.”

Besides this, since the flaw also affects chips embedded in many wireless routers, the issue also makes it possible for attackers to intercept and decrypt network traffic transmitted from connected devices that are not vulnerable to Kr00k, either patched or using different Wi-Fi chips.

ESET researchers reported this issue to both affected chip manufacturers, Broadcom and Cypress, last year, as well as many affected device manufacturers who are responsible for developing a patch to mitigate the problem via software or firmware updates for their users.

Apple has already released patches for its users, some should have issued advisory or security patches at the time of publication, and other vendors are still testing the issue against their devices.