The zero-day attacks started somewhere at the end of last November or at the beginning of December and are potentially still ongoing against thousands of publicly exposed DrayTek switches, Vigor 2960, 3900, 300B devices that haven’t yet been patched with the latest firmware updates released last month.

The zero-day vulnerabilities in question can be exploited by any unauthorized remote attackers to inject and execute arbitrary commands on the system, as also detailed by a separate researcher on his blog. 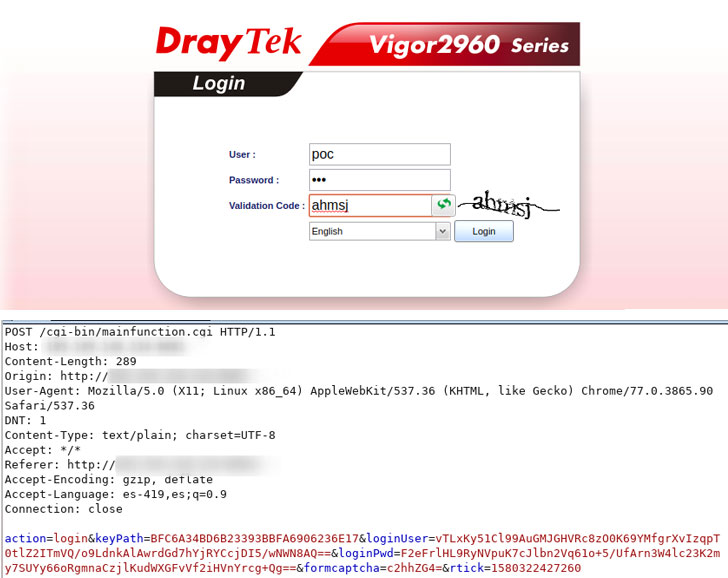 “The two 0-day vulnerability command injection points are keyPath and rtick, located in the /www/cgi-bin/mainfunction.cgi, and the corresponding Web Server program is /usr/sbin/lighttpd,” the report says.

NetLab researchers have not yet attributed both attacks to any specific group, but it did confirm that while the first group simply spied on the network traffic, the second group of attackers used rtick command injection vulnerability to create:

To be noted, if you have just recently installed the patched firmware, or installing now, it won’t remove backdoor accounts automatically in case you’re already compromised.

“We recommend that DrayTek Vigor users check and update their firmware in a timely manner and check whether there is a tcpdump process, SSH backdoor account, Web Session backdoor, etc. on their systems.”

“If you have remote access enabled on your router, disable it if you don’t need it, and use an access control list if possible,” the company suggests.

Affected companies and individuals are highly recommended to install the latest firmware updates to completely protect their valuable networks against malware and emerging online threats.